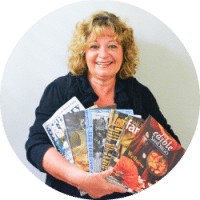 I’ve been afraid of heights since childhood. It all started when, after watching the original Peter Pan movie, I believed that if I worked hard enough, I too could fly.

For days, I tried jumping off my bed, flapping my arms, but nothing happened. So, I climbed to the roof (yes, the roof). Now I was high enough to get momentum. But, instead of flying, I hit the grass below—hard. I didn’t have any broken bones from my crash landing, but I did wind up with a sprained ankle and several good bruises.

So, I never mastered flying. What I did get, however, was a fear I carried into adulthood—the fear of heights.

On a family trip to Cabo San Lucas, my younger brother told us he had a surprise adventure planned. That adventure ended up being zip-lining. Wonderful! But in order to get to the highest zip-line point, we had to hook up our safety belts, cross a wire over a riverbed canyon far below, and then proceed to vertically climb a cliff wall to get to the top.

I told my brother there was no way I could cross that wire or make the climb. Our guide said if I didn’t, they’d have to helicopter me back down to our starting point. My dear brother looked me in the eye and said, “Nor, it’s okay to feel the fear, but you have to do it anyway.”

Palms sweating and heart racing a mile a minute, I let them buckle and snap me in, took a deep breath, and off I went. That day, I made it across that river and climbed that rock wall.

You’re probably wondering by now what this has to do with travel writing. Let me explain…

Many aspire to become a travel writer… but they never actually try to get anything published.

One of the biggest reasons not to start? Fear.

I liken this to teaching our grandson to ride a bike. It took forever, and he kept saying, “I can’t do it. It’s not going to work.” He even shed some tears in the process. But it wasn’t fear of falling or injury that scared him. It was that he was afraid to fail.

He did eventually learn to ride that bike. And, when he finally got the hang of it, no smile was bigger. He’d succeeded! He could now ride in the neighborhood with his friends.

This is exactly what it’s like to get your first byline. The feeling is overwhelming joy. Getting to see your piece in print—with your name!

Breaking into travel writing is much like crossing that riverbed, climbing that wall or riding that bike. By not sending that query or article to an editor, your story never gets told.

Many new writers let self-doubt take control. They say to themselves, “Maybe my writing isn’t good enough.” “What if I never hear back from the editor?” “But if I get a rejection, then what?

Truth is, all of those things happen—even to those of us who’ve been writing for a while. But the more important fact is that there are individuals, just like you, with no formal journalism training who are getting stories published. It isn’t necessarily because we’re better writers or didn’t have some degree of trepidation or self-doubt in the beginning. It’s because we felt the fear and did it anyway.

You never know how successful you can be until you get started. Do it! Do it now!