One of the staples of my photography—and a big reason that clients give me repeat assignments—is my ability to capture portraits that convey the emotions of the people and the context that they find themselves in at that particular moment, whether they’re war refugees or victims of natural disasters.

Here are a couple of portraits that I’ve shot on humanitarian assignments: 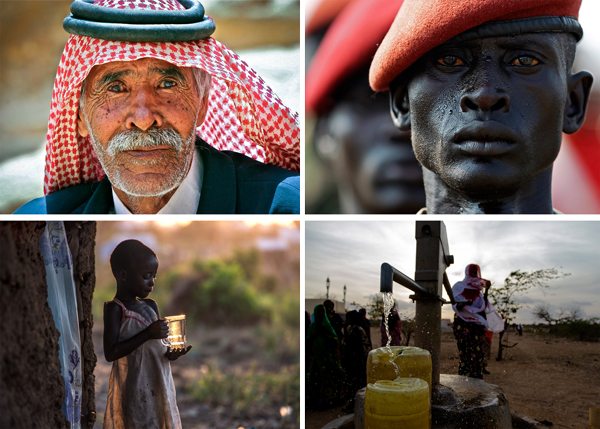 Often, beginning photographers will see an interesting scene and shoot it immediately. Afterward, I’ve overheard them say, “That’s not great, but I can crop it in Lightroom.”

Yes, you can crop it to get the close framing you want, but that convenience comes at a very high cost—reduced resolution. In order to take better photos—and get the very best shot at the highest resolution possible—you need to get up and move closer to your subject, and frame the shot in the camera the way you would want it to look after you cropped it.

But most of us—especially new photographers—are sensitive about intruding into someone’s personal space and getting “caught” taking a photo of them. We try sneaking the shot or hiding ourselves so we are not seen… but that’s not how professionals do it.

One of my heroes was Robert Capa, a war photographer and photojournalist and arguably the greatest combat and adventure photographer in history. During his career, he risked his life numerous times—most dramatically as the only non-military photographer to land on Omaha Beach on D-Day.

Capa redefined wartime photojournalism. His work came from the trenches as he photographed alongside the troops. His images put the viewer into the action. He was famed for saying, “If your photographs aren’t good enough, you’re not close enough.”

That line rings in my head every time I put my camera up to my eye. I think: “Frame the shot, move in, reframe, move in…”  All the while I’m building a relationship with the people in front of my lens. I’m smiling, nodding in affirmation, and then going back to my viewfinder and continuing to shoot.

If you want to greatly improve your photography, you don’t need a huge assortment of lenses. But you do need at least one good lens, a trained eye, and the ability to move closer to your subject.

So for better photos… move your feet!