I didn’t bother to bring model releases with me on our trip around the world — and it won’t make a lick of difference when it comes to selling my photos. I’ll explain why here below.

But first, I want to back up and catalog a few things we know.

1.) We know that pictures with people in them sell better than those without. And how do we know this?

For starters, look at the portfolios that sell best on istockphoto.com (or any other online stock agency) and you’ll see that it’s those with people that buyers want.  Open up any travel magazine, newspaper, or text book and you’ll find more evidence there — the majority of photos include people.

2.) But here’s what else we know: Sometimes, you don’t need the full person in the photograph to make it a saleable people shot.  Adding just a simple human element — an arm, a shadow, someone’s foot — can make the photograph more saleable too.

Let’s take a look at some of the photos professional photographer, Shelly Perry, shot at my wedding.  They include people (or at least parts of people)… 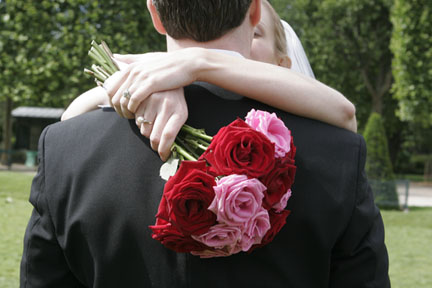 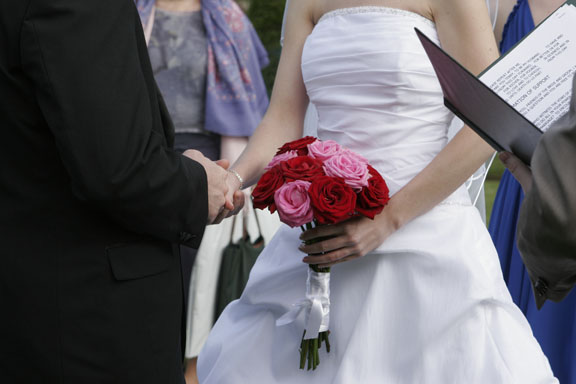 All three of these photos say, “wedding.”  All three include a human element.  But none requires a model release.  They could have easily been taken by a bystander and sold without my signature.

Why are pictures like this an attractive option for photographers?

Well, I’ll tell you why I think so and why I took so many of these kinds of shots during my recent honeymoon travels: First, I was traveling to destinations where I didn’t speak the language.  Ordering a cup of coffee was a challenge… getting someone to sign a model release would have been nearly impossible.

Not only that, but I just don’t like asking folks to sign a release.  If I were going to ask people to model for me in some sort of formal shoot (like we do at some of our live photo workshops) that would be one thing.

But to stop somebody on the street and ask her to sign a model release — somebody whose picture I’d just snapped — just feels too invasive to me.

Does that mean that I only snap pictures where you can’t identify the people?

Here’s the rule of thumb: For editorial or fine art use (that’s magazines, newspapers, textbooks) – you don’t need a model release. For stock agency or other commercial use – you do (and that’s where the human element pictures come in).

If the person in your shot is unidentifiable (as I am in Shelly’s photos, above) then you don’t need a model release — even if you are selling your shot for stock or commercial use.

I know (and now you know) that those wedding pictures Shelly took are of me and my husband.

But even if I could prove in a court of law that I was in that exact location, wearing that exact dress and jewelry, holding those exact flowers, at the exact time that those pictures were taken, I still wouldn’t have a case.  A judge would still say that, in those photos, I am unidentifiable.  And, so, Shelly could continue to sell them for stock and commercial use without a model release from me.

Selling Your Pictures without a Model Release

What does the above rule mean for you?

It means that you can easily follow Shelly’s lead and turn any special event into a money-making opportunity (and you won’t even need a model release).

The next time you attend a wedding, a birthday party, a high school graduation — don’t try so hard to capture the front of the subject’s face or her entire body in your picture.  Look, instead, for “unidentifiable” people photos you could sell for stock use.

Look down at your subject’s feet.  Focus on her hands. Shoot from behind her head.  You’ll discover all sorts of ways to include a human element in your photos — without including an identifiable human.

Which reminds me, these days, with warmer weather upon us, lots of humans are outside — enjoying barbeques, pools, and picnics. Tomorrow I’m going to send you a few tips on how to capitalize on that and shoot better pictures outdoors.

PRACTICAL WRITING PROMPT OF THE WEEK:

Have you ever traveled to a place that felt… well, fake?

I hate to say it, but that’s something I struggled with in Dubai.

Sure the markets looked cool — stocked as they were with antique swords, magic genie lamps, and hand-painted oil bottles — but I found Made in China stickers on the bottom of most things.

Shopping at the Madinat Jumeirah was just about as authentic as shopping at the Aladdin store in downtown Disney or the Moroccan Pavilion at Epcot.  The place was even air-conditioned.  It looked as if it could be hundreds of years old – but, in fact, it just went up a few years ago.

So how do I write about this place? I mean, I could write about how inauthentic it felt — an essay about my impressions. But travel essays and articles about one’s impression of a place are hard to sell. Not to mention, it might come off as a negative piece even though I did, in fact, enjoy shopping there.  (I bought lots of little genie lamps to use as Christmas tree ornaments.)

The trick — when you find yourself in a similar bind — is to simply find an audience who wouldn’t be so put off. You needn’t be untruthful. You simply find a reader for whom the truth is not such a deterrent.

For instance, in the case of Dubai, I think kids would love it — fake or not. With water parks, an indoor ski slope, camel rides, and just about every kind of water sport you can imagine, Dubai would make a great vacation destination for families with children.

And, in fact, despite the fake feel of Dubai, I found it an unexpectedly pleasant stop for honeymooners.  The way I look at it, lots of honeymooners choose a resort vacation — they go to a tropical island and never leave the all-inclusive bubble. Well, while Dubai has that same sort of manufactured feel about it — it’s splendidly luxurious and there’s lots to do — more than can be said for many of those cookie-cutter resorts.

This week, think about a trip you’ve taken to a place that felt inauthentic and come up with an audience you think might, in fact, appreciate it. Then write it up for that reader.

Reader Bobbie Hamilton wrote this week to say that the last article she penned was just published.  She said…

“The Salty Side of the Grand Turks Lighthouse. It looks so cool — one whole page, slick paper, and one of my pictures of the lighthouse in Lighthouse Digest.

The fact that I found the right niche for the story is the plus for sure.”