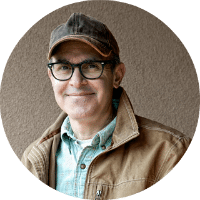 Over the past 14 years, I’ve worked on a number of assignments, ranging from a simple image of a cup of hot cocoa… to a magazine cover shot involving models, lights, and assistants… to a six-week assignment for a Frommer’s travel guide about Puerto Rico.

During the Albuquerque Balloon Fiesta Photography Expedition this week, we tried to simulate this feeling of being on assignment by encouraging attendees to work on one or more particular themes over the week, so they’d return home with a cohesive collection of photographs they can sell.

Architecture, doors, street lights, and colorful patterns all make great themes to collect… as do people on bikes, food, motion and, in our case, balloons with unique shapes and colors.

While I enjoy photographing on assignment—knowing I’ll get paid for my efforts—assignments also provide less freedom since the subjects you photograph are selected for you by the client. You, however, get to decide how you’ll portray them.

For example, one of the subjects I had to photograph for the Frommer’s Puerto Rico guide was the Puerto Rican parrot—a critically-endangered species that I’ve never seen, even though I grew up on the island.

After a little research I discovered that, as of 2006, there are only 35-40 of these birds left in the wild, so my chances of photographing the bird were small to nonexistent.

Still, a discussion with the book’s photo editor about our problem yielded the following exhortation from him: “Surprise me!” That to me sounded like both a challenge and freedom to be creative so I went about trying to surprise him…

Because I had 164 other subjects on my six-week shooting list, I drove to the El Yunque Rain Forest (one of my subjects anyway) and stopped at the visitor center to learn more about the parrot and get some idea as to where in the forest I could find one.

Much to my delight (sort of), the visitor center’s museum had an exhibit of the parrot inside, complete with a plastic bird enclosed in a Plexiglass box.

With the words “Surprise me!” dancing in my head, I took a few photos of the exhibit, trying hard to get a clean shot without including too much extraneous material like the interpretive sign behind the parrot. However, in the interest of full disclosure, I captioned the image as a “manmade exhibit” so the editor would know what he was looking at.

While photographing in the rain forest after my stop at the visitor center, I looked for the parrot but never saw one.  And this happens one way or another whenever you’re traveling.  Sometimes you get lucky and sometimes you don’t.  Sometimes there’s a big yellow truck in front of the church you want to photograph.  And sometimes landmarks and famous signs are under construction.

When this happens, whether you’re on assignment for yourself or for a publication, you always have freedom to interpret a subject in your own, unique way. Exercise that freedom. 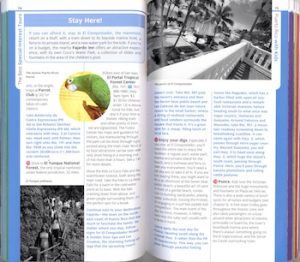 See yourself as a problem-solver and work the subject.  Walk around it and look for a different angle that hides the truck or scaffolding.  Come back at twilight or find a way to shoot from above or below that hides the obstacle.

And as it turned out, the editor cropped the picture in a circular fashion and included it in the book. I guess in the end it was I who was surprised.