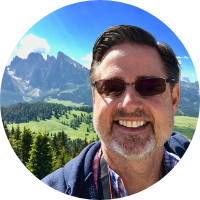 Talent will not; nothing is more common than unsuccessful men with talent.
Genius will not; unrewarded genius is almost a proverb.
Education will not; the world is full of educated derelicts.
Persistence and determination alone are omnipotent.

In high school, I read the above quote from Calvin Coolidge and have taken his message to heart ever since.

And eventually, today, to find success with travel writing. The old Nike adage, “Just Do It,” sums it up nicely. So, I did it.

As a tennis coach for many years, I’ve worked with hundreds of young people who want to get better at tennis. In every instance, one of the biggest hurdles they face is overcoming the fear of failure.

Young athletes have to learn not to focus on the negative but on the positive steps they can take towards success. To know that each failure really is just a stepping stone to success.

The same is true of beginning travel writers. Don’t focus on everything you don’t know. Instead, focus on being a successful travel writer and on what you do know and what you can learn.

Of course, that doesn’t mean that every new travel writer will be the next Rick Steves. But it does mean that tomorrow, and next month, and next year, you will be a better writer than before.

The secret to overcoming failure is simple. Just follow in the footsteps of successful people.

In my case, I looked at people like Noreen Kompanik, Betsi Hill, and Jed Vaughn—all who share their stories on this site—and others as successful new writers to emulate. What makes them successful? What did they do when they were starting out? What is their advice? What lessons can you learn from them?

Don’t let fear of failure stop you from your dreams. Through persistence and determination, you can conquer your fears, and move steadily towards your goals.