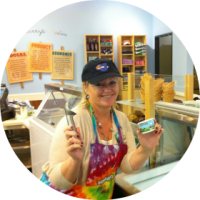 There are plenty of reasons to be a travel writer. Obviously it brings more travel to your life. The satisfaction of seeing your byline online and in print and the wealth of experiences that come your way as a writer rank pretty high up on the list, too.   But over the past 11 years, as my travel writing career has evolved, I’ve noticed several unexpected travel writing benefits—benefits that have touched every area of my life.

Education. I was an honor student in school and maintained a 4.0 GPA in college, but the education I receive through my travels surpasses anything I’ve learned in a classroom. Being introduced to new cultures around the world has educated me about traditions, history, and even foods. I suppose you could say the world is my classroom now.

Skipping lines. I hate waiting in line. Admittedly, patience isn’t one of my best qualities. Little did I know that becoming a travel writer would end those wasted minutes waiting for my turn. While my husband and I were visiting Quebec City, our personal tour guide whisked us in front of the seemingly unending line waiting to enter the Notre Dame Basilica. At the Henry Ford Museum outside Detroit, I was excited to find out we could take a ride in an original Model T. Of course there was a very long line of folks ahead of us. Once again, the attendant walked us to the front of the line and escorted us into the Model T. I’ll admit it, I’m spoiled.

Accessing the Inaccessible. My job grants me access to people and places that aren’t open to the public… and it doesn’t cost me a penny. For example, in Norway I was introduced to a celebrity chef who took me mushroom picking to show me how he forages for ingredients in the dishes he prepares at his restaurant. In Germany, I was given a private castle tour by a knight… seriously. And in Niagara Falls, New York, I was escorted through the Cave of the Winds attraction after hours to stand in the mist of the thundering waterfalls as fireworks lit up the night sky—pure magic.

Fitness. While I’ve always been an active person, I wasn’t particularly fit. Sitting in an office 40-plus hours a week doesn’t encourage fitness. As a travel writer, I’m more active. Whether I’m visiting a European city walking for hours on cobblestone streets and climbing stairs to the top of a cathedral, or in a tropical destination trying new watersports, travel writing has encouraged me to get fit. As a person who doesn’t want to miss out on new adventures, knowing that I need to be relatively fit to really enjoy the experiences that come my way has given me the motivation to work out more when I’m home and to eat a healthier diet.

I’ve become the World’s Coolest Grandmom. As my writing career evolved, I began focusing on a few niches. One of those is multi-generational travel. As the author of a Globetrotting Grandmom column, I’ve been given numerous opportunities to travel with my grandkids. When my granddaughter, Katherine, was six we went to Aruba together and I was there to see her get her first passport stamp. My grandson, Benjamin, was treated to a night of glamping that included s’mores around the campfire, an airboat ride, a rock climbing wall, and archery lessons. And my grandson, Marshall, who loves animals more than anything, was excited to have a close-up encounter with African porcupines at a Florida wildlife center. He still treasures the porcupine quill from that experience. They’ve each declared me the world’s coolest grandmom and I’m absolutely fine with that title!

If you love to travel, experience new cultures, meet people from around the world, and get paid to do all of those things, you might want to consider travel writing. You never know what other benefits will come with your travel-writing career!