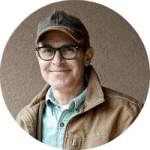 Like many things in life, photography has a set of rules that, if followed, will yield better results than not following the rules. This sounds very strict. However, and fortunately for us, photography’s compositional rules are more like suggestions.

What constitutes complying with the rules is subjective… and breaking them once in a while is okay.

Perhaps the most basic compositional rule in photography is the rule of thirds. It requires no technical knowledge or expertise, so it’s easy to apply.

A quick Google search will reveal that there are more definitions of the rule of thirds than there are stars in the sky. Here’s one of those definitions:

The rule of thirds is a type of composition in which an image is divided into thirds, both horizontally and vertically, and the subject of the image is placed at the intersection of those dividing lines, or along one of the lines itself.

Following is a graph that illustrates the concept, with the red dots marking the spots where you should place your subjects: 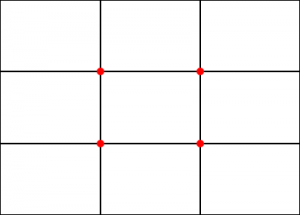 This is the kind of definition that glazes the eyes and numbs the mind—to the point where it takes the fun out of photography. My interpretation of the rule of thirds is broader, simpler, and less technical. And, in my experience in selling pictures, it’s just as effective:

Don’t put your photo subject in the middle of the frame.

Although I’m a careful, deliberate shooter (my wife prefers the word “slow”), I don’t compose my images by pulling out a ruler or graph to determine where I must place my subjects. Rather, I know that placing my subjects anywhere but in the center of a picture will yield more dynamic, aesthetically pleasing shots.

By way of example, in the following picture of backlit windmills, I placed the sun in the upper left corner of the frame, not that close to the intersecting lines the traditional rule of thirds would have called for. Yet I have sold this image.

Don’t get me wrong, I have sold plenty of images that comply with the more traditional definition of the rule of thirds. My point is that the rule doesn’t need to be interpreted strictly. 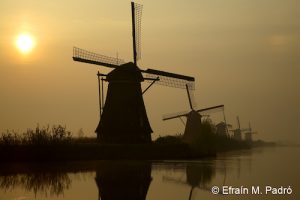 In fact, sometimes it’s right to put your subject in the center. In the picture of macaroni and cheese below, I placed the dish smack dab in the middle of the frame. I’ve also sold this image. Go figure. 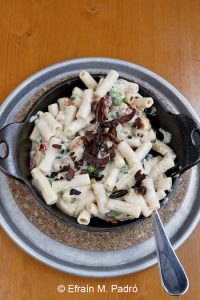 Besides food, other subjects that would look good centered include flowers, faces, and buildings, to name a few.

When I’m out in the field, I tend to photograph subjects both centered and then not, if I think I could get some pleasing compositions either way. There’s no rule against that.