One of the photo subjects I enjoy most is moving water. I love the ability to control what the water looks like by simply changing my camera’s shutter speed. A fast shutter speed, say, in the 1/500th second range, will freeze the water and give it a gnarly, crunchy look. A long, multi-second shutter speed will make waterfalls look silky and veil-like. Both looks can work, but what looks best will depend on the subject and your personal preferences as a photographer.

Here are a few tips for getting the look you want:

** 1. Experiment. The water in fountains, waterfalls, rivers, and oceans moves at different speeds. You’ll need to try a variety of shutter speeds to see what looks best for your particular subject. Although many photographers like the silky look better than the gnarly one, a fast shutter speed that freezes the action might work better in certain situations. For example, if you’re photographing giant waves in Southern California, I’d recommend a fast shutter speed to capture the arch of the wave at the peak of its height, rather than a slow shutter speed where the wave is more of a blurred mass of water without much definition.

** 2. Keep your finger on the shutter. When photographing very fast-moving subjects like the just-mentioned giant wave, it is very difficult to catch the subject at just the right moment. To increase your chances of getting the shot, engage your camera’s rapid-fire or continuous shooting mode so you can capture a full sequence of action, improving your chances considerably. (See your manual to find out how.)

** 3. Continuously focus. After engaging your camera’s rapid-fire feature, also turn on its continuous focus mode, which automatically tracks and focuses on a moving subject. (Again, see your manual.) As you pan along with the moving giant wave, the camera does the focusing. However, like people, cameras are not perfect, and you will not get a perfectly focused shot every time. Even with the continuous focusing mode, shoot a series of sequences to get the shot you want.

** 4. Use a tripod. Especially for shutter speeds in the multi-second range, it’s impossible to hand-hold a camera without the entire image being blurred, so a sturdy tripod is a must.

** 5. Find a rock. Amid the movement and blurriness of moving water, include in your composition a static element such as a rock (or rocks), tree, building, or anything else that will serve as a visual anchor for your picture. This juxtaposition of blurred water and a static element is very pleasing to the eye. However, a tightly-composed shot of water alone — especially if the water is reflecting color or has interesting texture, can also be effective and even artsy.

Here are a couple of waterfall images to illustrate the different look you can create by varying shutter speeds. Both were taken in the El Yunque rainforest during a photo expedition in Puerto Rico. I took the first image at 1/20th of a second. You’ll see it retains quite a bit of detail in the water. And I took the second one at a full 2 seconds, giving the water that silky look. In this case, I like the second image better, because of the combination of veil-like water and solid rocks. 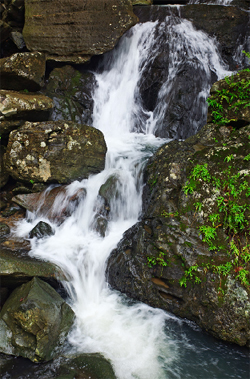 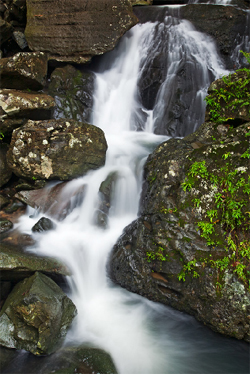