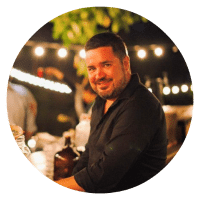 I’ve been invited to Romania several times to work on an ongoing project to promote the country. While there, I’ve taken boat rides down the Danube Delta, stayed in luxury eco resorts, toured castles, and tried the best food and wine the country has to offer. In the Philippines, I’ve been invited to island hop from one luxury resort to another as I dined on Filipino fusion cuisine and some of the freshest seafood I’ve ever had. I’ve been flown to Nepal to wander the chaotic streets of Kathmandu before retreating to the countryside to learn about the Nepalese people’s efforts to rebuild their country after the devastating earthquake.    Recently, while in the Czech Republic, I was invited to sail over the town of Brno in a hot air balloon, dine on freshly shucked oysters and sparkling wine at a VIP garden party, and spend a night in a nuclear bunker. And soon I’ll return for a second consecutive year to stunning Orange Beach, Alabama, where I’ve been invited to judge at the World Food Championships, the biggest food sport event in the United States. While there, I’ll visit a local oyster farm, zipline, and dine at some of the best restaurants in the region. All of these amazing travel experiences have come from networking and self-promotion, which are essential for a professional blogger. As a blogger, it’s crucial you develop a good name and reputation for yourself in the industry, as editors and tourism boards are constantly talking about and referring bloggers to one another. But you have to do more than put on a good face. Most of the time, you’ll need to be your own one-person hype team. There are so many bloggers out there now that we can’t expect opportunities to come to us. We must go out and there and find them. You can do this by networking at conferences and industry events, and by discussing and promoting your most recent work and collaborations. If you’ve worked with a destination or tourism board, be sure to mention the experience to any tourism boards you hope to work with in the future. Let them know in which ways your project was a success, especially if you have hard numbers or figures to back it up. For example, say a destination was tracking social media coverage during and after your visit. They are often more than willing to tell you the number of impressions (or views) they received during these periods. Be sure to share that number during your talks with other tourism boards! By sharing your success stories with decision makers, you can motivate them to work with you. Last year I worked on a campaign in Greece to promote the lesser-known but idyllic island of Syros. I was part of a small group, but together we managed to generate more than 70 million views, and that performance won us gold at the Tourism Awards in Athens. You can be sure I mention this whenever I’m in talks with other tourism boards! If you don’t have any concrete numbers yet, you can also offer to send testimonials. Either way, when tourism boards and press trip organizers know you’ve had success on previous campaigns, they are much more likely to work with you. So, get out there, over-deliver on every project, press trip, article, or blog post every chance you get, and share your successes with whomever you want to work with next. That way you’ll open the door to invitations to all sorts of amazing travel experiences! Share on Facebook