I just finished two straight weeks of traveling alone with my kids.  My daughter Charlie and I went to the Grand Canyon and Moab, UT.  And my son Warner and I went to Paris. 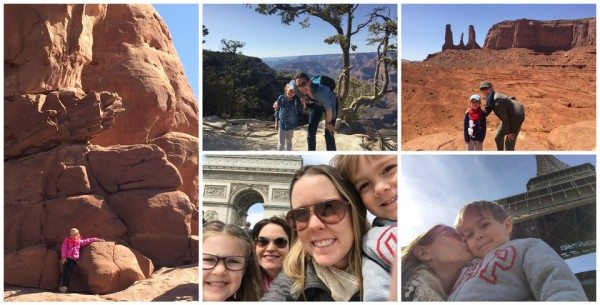 When I travel with them and my husband Terry isn’t with us, my biggest fear isn’t about them getting hurt.  It’s about something happening to ME!

What if I get hit by a car?  What if they wander into a place they shouldn’t be and I fall into a place I shouldn’t be in a fast effort to save them?  What would they do?  Who would help them if I’m out of commission?

These are the things that plague my dreams the nights leading up to a trip.  It’s something we practice before we go (without scaring them too much because there’s only so much we can practice).

And it’s compounded doubly when we head to a place like Paris, Mexico, or Africa, because I — and certainly they — don’t speak a lot of French, Spanish, or Swahili.

Karen Thompson Walker talked a little about fears like this in her Ted Talk titled “What Fear Can Teach Us”.

The sailors chose the longest journey to South America, letting their fear of cannibalism dictate their choices.  Halfway through their journey, they ran out of food… just as expected.

And after the first ones started to die, the crew resorted to their own form of cannibalism to keep alive—the very outcome they had most feared with their safest option to sail forward to Tahiti.

I’d never actually go out and show them this wonderful planet we live on. Instead, I’d assume staying home was safer, even though all statistics show that kids are much more likely to die by a TV toppling over on them at home than they are from a parent being so severely injured while traveling that a child can’t find help or help themselves.

For me, it’s about preparation.  I have no idea how things could turn out if something tragic happens to me while traveling and my 5 or 7 year old becomes the lead decision-maker.  But I plan for it, and we practice it.

I also feel safer if all three of us knows a few key words in our target language before we leave.

So, this week, if this is you… and you’re over any fears others might have about traveling and you’re adventurous about seeing the world… I’m opening up our twice-a-year sale on both of our language programs.

It’s about power, confidence, prestige, and smarts.  It’s about keeping your mind active.  It’s about staving off dementia (because studies show learning a second and third language is the one skill that actually grows the physical size of your brain and staves off this horrible illness unlike learning to play a musical instrument, solve complicated math or complete crossword puzzles).

And it’s about communicating with more people around you, appearing smarter at cocktail parties, and, potentially, it’s about helping small children like mine who might be in an emergency situation one day without the language skills they need to help a fallen or lost parent.

If you’re interested in learning a second language the easy and fun way — without memorization — check out our tried-and-tested, proven-to-work language programs in Spanish and French. Just taking a little time each day for 30 days will have you sounding like a pro and ready to handle unexpected situations on your travels…