“When people join groups where change seems possible, the potential for that change to occur becomes more real.” – Charles Duhigg, The Power of Habit

More and more studies are showing that if you want to succeed at doing something, you should find a community of folks with the same goal.   Not only does it feel good to share our successes and discoveries… but when we see others succeed, suddenly we don’t want to be the last one left out.

Jo-Anne and Elsa met in our Travel Writer’s Café. They were two complete strangers with the same goal. Here’s what happened when they met up and took a trip together… 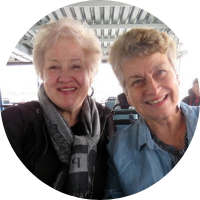 Elsa: Since moving to the United States from South Africa, it has been my goal to travel through all 50 states. While planning to see part of New England, I was looking for a travel companion, so I posted a message on the Café private Facebook group asking if anyone would like to join me on a road trip.

Jo-Anne: When I read Elsa’s message on the Café, I responded immediately. I hadn’t visited New England for years and a road trip sounded exciting! And so, our plans began.

Elsa: On our journey through Vermont, New Hampshire, and Maine, we were delighted to find that, although we shared similar interests, our approaches to the places we visited were different.   While Jo-Anne was keen to write about detailed historical facts, I was more focused on package deals, including accommodation, recreation, and libations. Between our two perspectives, we were able to notice more, and to write stronger articles.

Jo-Anne: We met as strangers on Travel Writer’s Café but when we met face-to-face, it was as if we had been friends for ages. My favorite part of the trip was the camaraderie we shared. We would brainstorm ideas for articles, titles, publications, and give each other suggestions. At one point, Elsa suggested, “that would make a good quote.” She was right, so I wrote it down to use in an article later.

Elsa: So far, Jo-Anne and I have written two articles relating to our trip, which were accepted for publication in November. I have another pitch approved and have ideas for four more articles. Jo-Anne has encouraged me to expand my horizons and think of additional outlets to pitch to as well, and I will be following up on those.

Jo-Anne: Since our trip, I’ve pitched five stories, had four accepted, and am working on two more. It was a fun time, and now we both have bylines! I’m thankful for such a great community—and for the friend I made because of it.

Elsa: On our last night together, overlooking the beautiful ocean at Bar Harbor, Jo-Anne and I toasted the Travel Writer’s Café—where we met and became friends—and the good start to our travel-writing careers.