Other than the fact that it’s one of Latin America’s strongest economies and an emerging hub for start-ups and outsourcing, I didn’t know a lot about Chile before landing in Santiago Airport last September.

Outdoorsy friends had spoken of amazing landscapes on par with those of Argentina to the east. And I’d tasted enough Chilean wine to assume that at least some of the countryside would be covered with vineyard-covered hills…

What I didn’t expect was that this sliver of a country would have some of the most unusual and surprising landscapes I’d ever encountered, most notably the Atacama Desert and inspire multiple travel stories from just one trip.

After a brief stopover in Santiago, I joined a small group of reporters from Spain and China on a flight to Calama, the main jumping-off point for the Atacama’s celebrated tourist hub: San Pedro de Atacama.

We would spend the next week out in the desert, hiking up sand dunes, soaking in hot springs (while joking about how hard we had it and sampling local food and wine).

Of course, it wasn’t all fun and games. We spent an entire morning learning about astronomy in the Atacama (which, incidentally, is one of the most incredible places on earth to stargaze).

We visited Chile’s new ALMA observatory, and—as qualifying journalists—got special access to the mountaintop where the station’s enormous telescopes were kept (after mandatory medical checks to ensure we were in good enough shape to handle the thin air).

We also got invited to visit the site of a currently under-construction underground copper mine where we donned steel-toed boots and safety gear before descending 850 meters below the center of the earth. 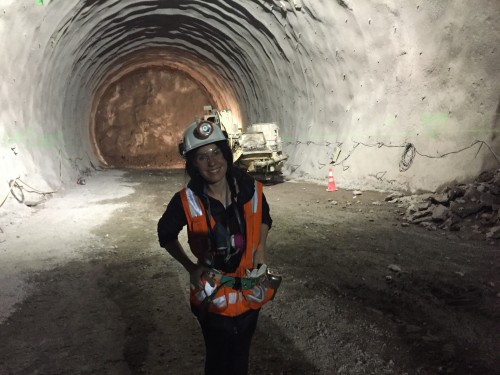 Before I left for Chile, I didn’t have much of an idea of what stories I would find or to whom I would pitch them. I ended up getting an assignment for a round-up of Santiago highlights from a publication I write for regularly, but the other two stories I placed were with new-to-me outlets.

The first was a narrative piece on the role of women in copper mining, arguably Chile’s most important industry.

We’d spent a ton of time in and around copper mines, hearing about annual reports and mining innovations, but as a travel writer—and as a person who finds human interest stories more inspiring than business as usual—I was less interested in the industry and more drawn in by the people behind it.

I went into the trip hoping to learn more about women in mining, but it wasn’t until I met miner women in the flesh, and heard their stories, that I was able to flesh out a solid angle for my story.

This pitch led to a 2,000-word narrative piece that I fleshed out in a rainy Copenhagen hotel room a month later. By December, the piece had been translated into French by an affiliate of the original publication and published on one of France’s top news sites.

While at the mine, I also found out that the old township where miners once lived had recently been closed down due to health and environmental concerns and only a ghost town remained.

After poking around and asking local representatives as many questions as I could, I learned that while visitors could go on tours of the old ghost town, the mine was planning on turning it into a tourist attraction. Bam: another story!

In the two months that followed the trip I had three stories: one that I had pitched in advance, one that I had an idea about but needed to be on the ground to research, and one that emerged just by chance, by keeping my eyes and ears open and asking lots of questions.

If you want to maximize the amount of stories you get out of a given trip, I’d recommend you follow the same approach: try to pitch easy-to-report stories (such as round-ups or lists of top sites) before you go, but also research stories that interest you when you are on the ground, even if you don’t yet have a clear idea of how the story will develop or where to place it.

Finally, always take note of little tidbits and surprises you may find along the way: you never know what kind of interesting stories may emerge!