Recently I was searching for a destination with a patriotic theme for the upcoming July issue of my “Travel with Terri” column in Around Wellington magazine. I decided to visit Rapid City, South Dakota — the City of Presidents. What could be more patriotic than the heads of four great presidents carved into the side of a mountain in the picturesque Black Hills of South Dakota?

Since this was a travel writing trip, the first thing I did was contact the director of the Rapid City Tourism Department. I explained my story goals and in a matter of hours I had secured a complimentary suite at the historic Alex Johnson Hotel — a beautiful, luxurious hotel located in downtown Rapid City.

My contact also gave me a list of interesting patriotic sights in the area which, of course, included Mount Rushmore. It also included a walking tour of downtown Rapid City where you can look at bronze sculptures of each past president on street corners throughout the city.

Also on the list was the Crazy Horse Memorial. I had visited Mount Rushmore a few times before my press trip, but I had yet to visit Crazy Horse, located just 17 miles from Mount Rushmore… and that’s where things got interesting.

Arriving at the Crazy Horse Memorial, I was greeted by Pat, who is in charge of public relations for the memorial. Pat has devoted his career to the Crazy Horse Memorial project and is very knowledgeable. The site is home to the Indian Museum of North America and the Native American Cultural Center. I visited these areas with Pat as he explained more about the memorial.

In 1929, Henry Standing Bear, a Lakota elder, initiated a project to honor Crazy Horse — a leader of the Lakota people in the Battle of Little Big Horn. Henry Standing Bear wrote to sculptor Korczak Ziolkowski saying, “My fellow chiefs and I would like the white man to know that the red man has great heroes, too.”

The Black Hills are sacred to the Lakota people so an appropriate mountain was chosen and the first blasting for the monument began in 1948. The Crazy Horse Memorial is a non-profit venture and is funded solely by donations, grants, admission fees, and proceeds from the gift shop.

As Pat showed me around, what I didn’t realize was that he had something special planned for my visit. “Would you like to take a ride up the mountain?” he asked.

I wasn’t sure what that meant exactly but of course I said yes!

My boyfriend was traveling with me for this trip so we both followed Pat to his SUV and up the mountain we went. When Pat said we were riding up “the mountain” he was referring to the actual mountain that is being carved into the Crazy Horse Memorial. The same mountain where crews are still setting off dynamite blasts. I love passing the warning signs that say “do not enter, blast zone” as if they don’t exist!

We arrived at the top of the mountain, and Pat parked the SUV, handed us hard hats, and said, “Would you like to walk on a national monument?”

We stood next to the face of Crazy Horse, actually touching the sculpture. We also walked out onto what will be his arm upon completion. I really hope the monument is finished in my lifetime so that I can point to the elbow of Crazy Horse and say, “I stood there!” 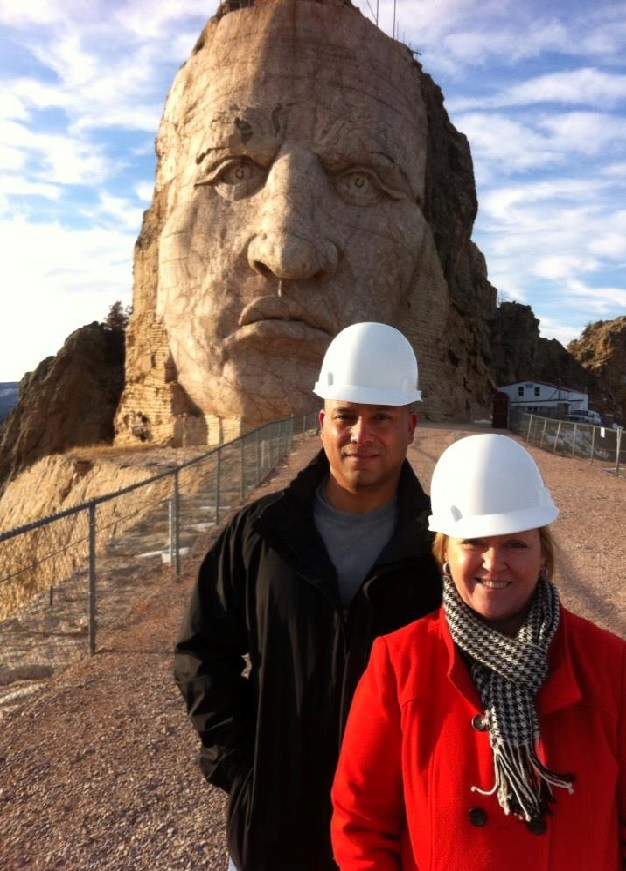 This was just one of many things I have been able to gain access to in my life as a travel writer all over the United States and around the world. I receive VIP treatment in hotels, spas, and restaurants.

I’ve driven reindeer, hand fed bears, dined with dignitaries, and even walked on a national monument. I love this job. And I also love the paychecks that arrive after I have written about my experiences.

And my boyfriend, well he loves that I’m a travel writer, too!