In May of last year, I was getting ready for another videographer job in Europe to film travel videos for tour companies based in Germany.

To prepare for the trip, I went on the companies’ websites and noted all of the locations and attractions that tour participants would visit on each of the travel packages on offer.

Based on this information, I then created a filming schedule, complete with addresses and contact details of museums and attractions, so that I could organize any filming permits.

I also created a Google map with all of the locations, so that I could design a route that wouldn’t require me to double-back and drive extra miles.

For this trip, my girlfriend and I were going to start in Belgium and then film Holland, followed by eastern Germany. Our first stop was Bruges in the north of Belgium.

Made famous by the movie In Bruges with Colin Farrell, and very prosperous in the middle ages, Bruges’ affluence is still visible in the beautiful historic houses that line the canals.

One of the best ways to explore this city is by canal tour – just sit back and relax while a guide explains the history in four different languages. 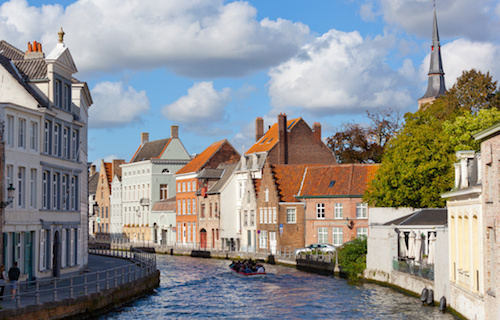 This is also one of my favorite ways to film a city, because I can enjoy the tour while I put my camera on a tripod and just film the scenery as it’s passing by.

But in order to fully capture a city like this, I’ll also need ground shots of boats passing through the canals or people strolling on those beautiful stone-paved alleys among charming restaurants and cafés.

One of the scenes I had to film was from the famous Belfry Tower, offering a panoramic view over the old town. But first I had to conquer 366 steps all the way to the top while carrying my tripod and camera.

This is when I notice how important it is to have light and small equipment. For example, I use a slider that is 60cm in length, but through its ingenious design it actually travels double that length. So I’m able to create those beautiful and professional looking slides without having to carry a heavy slider that has to be mounted on two tripods.

For inspiration, I often visit souvenir shops where they sell postcards of beautiful images taken in the city.

And, I look for things that tourists typically do in a place. In Bruges, for example, I captured people having a Belgian waffle with chocolate. There are also old-style horse carriages taking tourists on a ride through the center of the town. I set up my camera, so that I could capture the historic buildings and the Belfry in the background while a horse carriage is moving toward the camera. 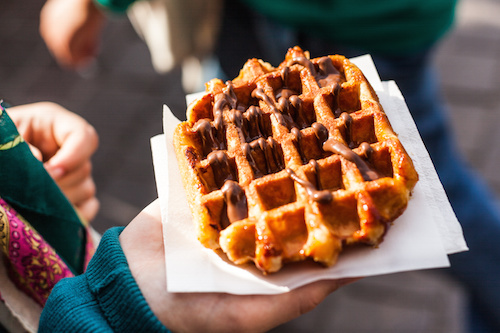 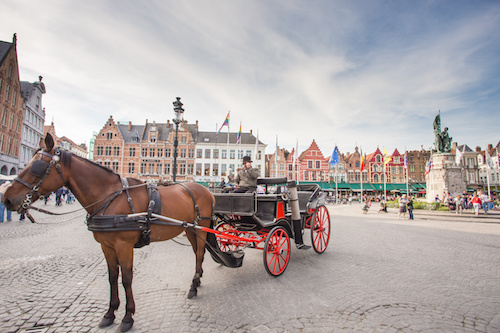 After a successful day of filming, we have time to relax and try out one of the beautiful restaurants along the canal. My girlfriend/camerawoman and I had a wonderful meal of local fish with a glass of red wine while discussing the day’s shooting.

Tourist boats were passing by in the canals just below the restaurant window, with the reflections of the evening light shimmering in the water. After our meal, we went back to our mobile home and re-watched In Bruges, trying to place each of the locations in the movie.

And we looked forward to the next part of our journey to Brussels and on to Amsterdam.

Here’s one of my clips from the Bruges trip.