Smartphones have become so powerful with decent HD cameras that you can now shoot and edit videos just using your Smartphone and they can look pretty good. During our last vacation on Tenerife in the Canary Islands, I really wanted a break from working, so I left all my equipment at home. But I still wanted a video as a memory of our trip. So I shot one using my iPhone and I edited everything on my iPhone as well, using an app called iMovie. Mac users will know iMovie, since it comes preinstalled on every Mac computer and costs only around $5 to install on the iPhone. Have a look at our little vacation video from Tenerife… As far as usability goes, it’s really quite easy to use and intuitive. You can trim clips, swap them around in the timeline, add music and titles as well as transitions between shots. You’ll need good eye-sight (or at least, your glasses) to edit on a Smartphone since it’s a smaller screen, but you can also use a tablet if that’s easier. An app I recommend for the iPad is Pinnacle Studio.  It looks like this: 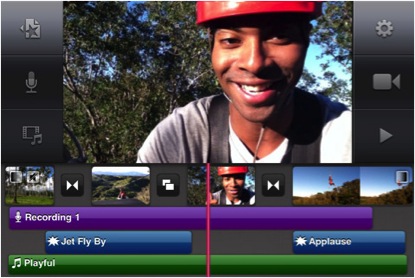 It’s a fully functional video-editing app for your iPad. The interface is easy to use with lots of basic editing options. 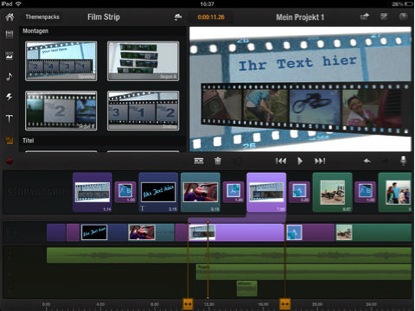 The app also has nice media organizer, a video enhancer, sound effects, and voice-over options to add documentary-style narration to your video. If you don’t have an iPhone or iPad, there are some really powerful software packages for Android, as well. One example is the Andromedia Video Editor, which is completely free and probably the best package out there right now: 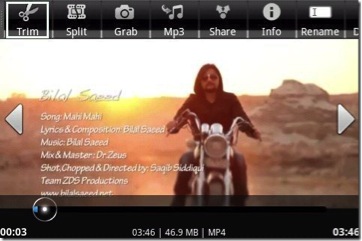 The best part of this app is the interface, which balances accessibility and functionality. It uses a “timeline” view and offers basic editing functions like trimming clips, changing their order, and inserting transitions. Rendering and exporting works reasonably well, though rendering can take a while if you’re editing a longer sequence. Also, the advertising that supports it – while free from the interface itself – can be bothersome when it starts opening pop-ups elsewhere. Another free but excellent video editing app for Android is AndroVid Video Trimmer.  Here’s a shot of what the interface looks like: 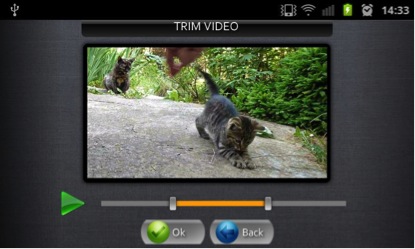 The functionality is even better than Andromedia Video Editor. And it makes it easier to trim middle sections out of a clip in your sequence. If you sign up for the free version, a big upshot is that the advertising is not as prominent, so less annoying than those Andromedia pop-ups. Or a pro version is also available, which allows you to create longer clips with more effects, making the functionality pretty amazing considering you’re working with a Smartphone. Most people don’t even know that they can edit Smartphone videos on their phone. Or if they know they have a HD camera, they may not have figured they can edit and add music with just a few easy moves. This puts you ahead of the game… And the best thing is, you can do it rather quickly, editing a video within 10 minutes and uploading it straight to Youtube or Vimeo from your Smartphone to share it with the world. It’s that easy. I do suggest you invest in a tripod and a tripod holder for your Smartphone, so that your shots look less shaky and more professional. Then no one will even know it was shot and edited on a Smartphone! So go ahead and try it out.  If you already have a Smartphone, you’ve got all you need to get started and could be earning money with your videos in no time. Share on Facebook