Life in the Bluegrass State doesn’t get more exciting than when Kentucky Derby time rolls around on the first Saturday in May. Horse-racing fans spend all year planning parties, picking out the perfect outfits and preposterous hats, and pulling out their best bourbon selection for the greatest two minutes in racing.

Realizing that this was a great opportunity to market some of my photographs, I started showing various clients the Maker’s Mark bourbon barrel shot that I captured while on a tour of the distillery last December. When blown up to a 36” X 48” print and framed in reclaimed wood, it becomes a statement piece in anyone’s home or office.

As I mentioned at the 2015 Ultimate Money-Making Photography Workshop in Portland, I had already sold several of these prints for $650 each.

This created some great momentum with new clients, and I have been able to sell several more of these since. The exciting result of all of this is the fact that the company that owns Maker’s Mark and several other bourbon distilleries is developing a plan to market these prints for me.

While this particular image has done very well in a very short period of time, the real hidden opportunity that has manifested itself is with the magnificent thoroughbred American Pharoah.

If you follow horse racing, the Triple Crown is the Holy Grail of the thoroughbred industry. To win the Kentucky Derby, the Preakness, and the Belmont within a five-week span is nearly an impossible feat and hasn’t been done since Affirmed last accomplished it in 1978.

Each year anticipation builds as three-year-old colts prep for a shot at the Derby, and each of the last 37 years no horse has stood the test of speed and endurance it takes to win all three races. This year brought the usual pre-derby hype, but there was subtle difference when prognosticators discussed American Pharoah. This horse, they said, was different.

After proving he could withhold stiff competition in the Derby, he blew away the field in the Preakness. Now the hype was off the charts – we could finally have a horse that could silence all of those that said it couldn’t be done. As a photographer, you have to smell or sense opportunities for your work. American Pharoah’s home base is Churchill Downs in Louisville, a short drive from my home in Lexington.

Researching his training schedule, I discovered that he would be working out early on a Sunday morning before he was to be flown to New York for the Belmont. I contacted the barn manager at Churchill and got the time that he would on the track running by himself.

I asked my oldest son, who had never seen a Triple Crown Winner in his lifetime, if he wanted to go with me to capture history in the making. He agreed and off we went at “O Dark Thirty” to get a glimpse of this magnificent athlete.

Planning is an integral part of being successful as a photographer. Great images just don’t happen: for best results, you need to PLAN your photo shoot. This takes a lot of thought and study of the subject you want to shoot. I knew we would only have 15 minutes to catch him, because he was only going to make two trips around the track. This meant getting to the track at least an hour before and picking the best vantage point from which to shoot.

I decided to set up next to the platform that NBC uses as their broadcast booth for the Derby – I mean if it is good enough for NBC it should be good enough for me, right? I took approximately 100 test shots with other horses trying to select the proper shutter speed, aperture, and ISO so I would be ready when Pharoah would fly by me.

I was extremely nervous because I knew I would get one shot, at the best two, in a 10-second window as he passed, to capture the essence of speed and power that he possessed. Finally the moment arrived and I started firing off a series of shots as I “panned” his every smooth and powerful stride. And then, just like that he was back in the barn!

I did try to get back in the barn area, but these horses are shielded with unbelievable security because of their value. So, unless I received a personal invitation from his trainer, Bob Buffer, I wasn’t getting in the barn. “Chimping” my results I was hopeful that I had something worthwhile. Now all American Pharoah had to do to really make the work pay off was go out and win the Belmont.

I went to the drive-through window at Keeneland Race Course here in Lexington the day before the Belmont to buy 10 – $2 win tickets. I figured if he won, I would keep the tickets and frame them with my image of Pharoah and they would be that much more valuable.

Well, as you know, the rest is history and I have been able to sell eight prints of the horse with the winning ticket for $300 each – I did save two for my grandkids.

And I have had many more requests for the image by itself. I also followed up this last Saturday with a return trip to Churchill Downs to get some more pictures of him as he was paraded before a huge crowd showing their appreciation for his great accomplishment. This time people from NBC were broadcasting from the booth, but I did manage to get within six feet of him as they led him around the track. 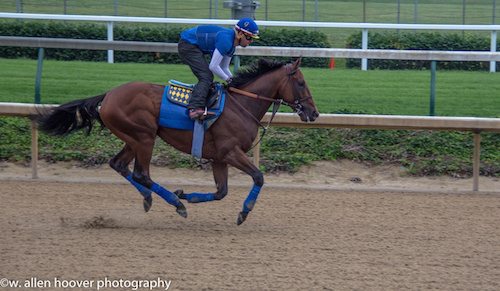 The keys to success in selling your images are planning, creativity, and patience. Work as hard at everything BEFORE you press the shutter as you do at your craft and you will be on your way. Now, I think I’ll have that bourbon!