A recurring theme we’re hearing from people who sell their images in online stock agencies is that if you have fun with your photos, the sales will follow. This stock photographer dresses like a Viking and a pirate… even a judge to fill his portfolio with fun people shots. Scroll down to see some of his best-sellers and get his advice on getting started. COMPUTER PROGRAMMER TURNED STOCK PHOTOGRAPHER     An interview with stock photographer Jerry Koch in Portland, OR BONNIE: Hi Jerry. Can I start by asking about your background? Have you always been a photographer, or did you come to it from another profession? JERRY: I’ve been a photography hobbyist for a very long time. Always taking a zillion pictures when on vacation or at family gatherings and often just for fun. My professional background was in computers as a Programmer/Analyst, with over 20 years experience. But I lost my job when the economy went bad. And I had really burned out on the field and wanted a change. I recognized that photography is my passion and it doesn’t feel like work to me. So, I decided to make photography my profession. It’s fun and even though I don’t earn the money I did in computers, I’m being paid for what I enjoy and don’t have the stress and aggravation of working for someone else. BONNIE: What led you to microstock and made you think you could sell your photos through online stock agencies? JERRY: I have a friend who is a graphics designer who uses stock photos in his work. He noticed my love of photography and suggested I try submitting photos to an online agency to see how I do. I was skeptical at first, because new photographers get very small royalties upfront. I wasn’t sure if it was worth the effort. At first I held back my best photos because I thought they were worth much more than the small royalty I would get. And, as expected, things did start out very slowly for me. But over time, more and more of my photos were being downloaded and I devoted more time to photo projects to grow my portfolio. Now, I find that my online stock portfolio gets me much more exposure than I could get on my own. I don’t have to go through the trouble and expense of printing and framing or matting photos to try to sell at the Portland Saturday Market, or some such venue. BONNIE: How do you come up with concepts for shoots? Do you research what might sell, or follow your own creative interests? JERRY: I used to try to guess what might sell and tried to do shoots on a concept that I thought would be popular. Sometimes, too, I would do things that I just thought would be fun. And, I found that more often the “fun” shoots got more downloads than the shoots where I was trying for sales. So, I’ve given up on trying to outguess the market and just go for fun ideas. When I work with models, I try to involve them in the creative process. If the model is having fun, I think it shows and the photos are more interesting. I talk to them about what characters they might be able to play. Do they have a uniform or outfit that would make them seem like a particular profession or type of person? Or, maybe use a fun setting for the shoot. Or, can we think of an idea like a “social issue?” I like to use humor in my photos and I’ve gotten feedback from all the models I’ve used that they’ve had a great time on my shoots. I think that’s the most important thing: to have fun and be creative and not worry about the money. Even if the photos don’t sell, we had fun shooting them. But I think the fun shows, and the downloads follow. BONNIE: What’s your favorite thing about stock photography? JERRY: My idea of what stock photography is has changed since I first started. In the beginning, I recognized “stock photos” as being elements to a graphics designer’s work — that my photos could be used in combination with text and/or other photos to make a finished piece. So, my early photos were of objects: my gold coins and piles of money were the most popular. But, I wanted to move toward using people in my photos. I thought it would be difficult to use models because of the required Model Release. So, at first, I was my own model. I had an idea for a “judge” shoot. I used my pastor’s office at church, had a black choir robe, took a flag from the sanctuary and put it behind me. I set up the tripod low to make the desk look like a judge’s bench, and I had a gavel. I did a whole series and was surprised at how many people asked me “Are you really a judge?” And that’s my favorite thing about stock photography: making staged situations look real. I’m a creative person. And, you might think that with photography, you’re just capturing images of real things that are there. But, it’s exciting to me to fool people, or bring make-believe situations to life. Another example is a series of homeless shots. I had a friend dress up as a homeless guy, and went to an area that looked realistic. And many people have asked me how I got a homeless man to sign a model release, since they don’t have address/phone, etc. for the form. But, he wasn’t really homeless at all. BONNIE: I’ve posted a few of your photos below. In them, you appear as a pirate, a judge, a business man, and various other characters. Do you like being your own model? 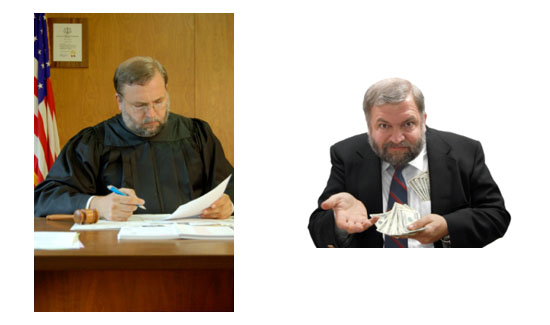 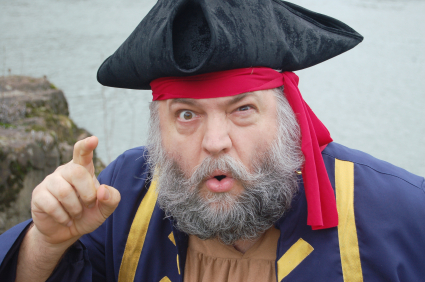 JERRY: At first I was my own model because I didn’t know where/how to find professional models, and I felt like I was imposing on friends and family when I asked them to model for me. But, now, even though I can find models who are willing to work for trade (they get copies of the best photos for their portfolio), I still like to play a character now and then just because it’s fun and I like being goofy. It’s funny: I did the “Viking” shoot at the last minute as kind of a lark. I’d let my beard grow long and wanted some shots of it before I trimmed it. And I had a plastic viking helmet and some German mugs to use as props, so I took some shots of myself, mostly to capture the beard. I was actually a little embarrassed about them because I have my shirt off and I’m fat and hairy and they’re not very flattering photos. But it turns out that Vikings are under-represented on the stock site and the Viking photos are much more popular than I ever imagined. Who knew? BONNIE: Since you’ve been contributing to stock for a few years, do you have any tips for hobbyists who would like to get started in stock now? JERRY: The most important thing is to have fun. Take photos of subjects that you enjoy and think are interesting. There may be people who can read the market and figure out what will sell, but I don’t think that’s necessary. I’ve found the things that sell are things that are unique. If you can find a style that is your own, people will come back to your portfolio. I’d also say, think “stock” when shooting the photos you normally would. On vacation, for example, have in the back of your mind what might make a good stock photo — cropping out people, or watching for things that are interesting that you might not shoot otherwise. Feel free to experiment. Once, I saw a metal sign-holder where the sign itself had been torn off, and all that was left was some rust and streaks of grungy paint… I shot it and it turned out to be a pretty cool background image. And finally, be prepared for rejection. Before an image is put up on a stock website, it will be scrutinized for technical and copyright issues. The hardest thing for me has been the image inspectors. On the one hand, they’ve forced me to be a better photographer because they have very high standards. However, I tend to take each rejection personally. Don’t do that. Try to learn from the rejections and remember that even the very best photographers have great images rejected. Try again. [EDITOR’S NOTE: Learn more about how you can turn your pictures into cash in our free online newsletter The Right Way to Travel.  Sign up here today and we’ll send you a new report, Selling Photos for Cash: A Quick-Start Guide, completely FREE.]