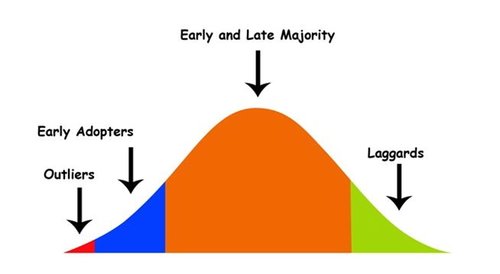 This first tip of people are your outliers or innovators. They’re people like Marc Charles, the creator of our Importing Fortunes program, who are really good at identifying trends and opportunities before other people know they exist. (Case in point: his early Alibaba success.)

This second group of people are your early adopters. They’re people who are good at recognizing a good opportunity when it comes along. And they like to stay informed so when something sounds and feels right, they can act on it fast.

The third group are those who either act at the pinnacle of success or shortly thereafter. These are called the early and late majority. They profit, of course. But they don’t make the same kinds of profits as the first two groups. They’re a little behind the ball. But they’re happy… though they do tend to wish they’d gotten in on the opportunity a little sooner.

And last are your laggards. We rely on them to eventually join the bandwagon and follow the first three groups. Sometimes they wish they had acted on something sooner. Most of the time, however, they accept that taking action has never been their thing.

Now, where do you fit on this wave?

I’m asking because right now you have an opportunity to join the early adopters group now that Alibaba has gone public.

You can either get in now and ride this wave to the top. Or you can wait and become one of the later two groups.

It’s a matter of being in the right place at the right time and following the path the outliers laid out for you at the start.

Try Importing Fortunes today and I know you’ll be happy.